Overview: This article presents the history of NASA’s Space Shuttle Program in a way that is engaging for elementary school students. Three printables have been provided for teachers to use in their lessons, including a Space Shuttle Facts for Kids handout, and 2 Space Shuttle coloring pages.

It is April 12, 1981, and for the first time in human history, a re-usable spaceship prepares to blast into orbit. A crowd has gathered at the Kennedy Space Center in Florida to witness this miraculous event.

Across the intercom, a metallic voice utters the iconic countdown, “T minus 10, 9, 8, 7, 6, 5, 4 – we’ve gone for main engine start, we have main engine start—” The voice is drowned by the roar of the engine. An explosion follows, and then dense plumes of smoke engulf the launch pad.

The Space Shuttle Columbia rises up from the gray clouds, travels across the sky and up into orbit. This successful first flight marks the start of a brilliant new chapter in man’s fledgling journey into space.

Parts of a Space Shuttle

Of these components, both the Orbiter Vehicle and the SRBs are reused. The Orbiter Vehicle returns to earth by gliding with its wings, and landing horizontally like an airplane. The SRBs fall back to earth and into the ocean, where they are picked up.

After the Orbiter Vehicle lands, it flown back to the Kennedy Space Center on a Shuttle Carrier Aircraft, which is a modified Boeing 747.

The first orbiter built was called the Enterprise. It was used in launch and land tests, but did not have the ability to travel into orbit.

The above information has been collected in the following printable: 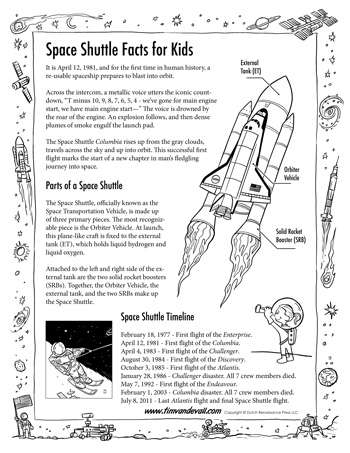 The concept of spacecraft that lands horizontally like an airplane dates back to 1954, before the Apollo missions. This concept was to be implemented through a research experiment called X-15. Over the years the X-15 program was succeeded by X-20 and then HL-10.

By the 1960s, the US Air Force decided that the most economical way to venture into space was using reusable designs. From 1969 President Richard Nixon supported the proceeding of the Space Shuttle development, which combined the horizontal landing capability with reusability. Each Shuttle was designed to last for 100 launches, or ten years.

In 1981, the Columbia made its way into orbit. This would be the first of 135 missions, lasting until 2011, when the Space Shuttle program was retired. Until the 1990s, the shuttle was mostly used in Spacelab missions and to launch satellites. Afterward, the shuttles serviced the space station.

During the 30 year program, two major disasters occurred. The first happened on January 28, 1986, when the Challenger disintegrated 73 seconds after launch. The explosion was caused by an impaired O-ring, a  seal was set between parts of the right SRB.

The second disaster occurred on February 1, 2003, when the Columbia exploded during reentry. This explosion was caused by damage to the wing which had occurred during launch. In both disasters, all 7 crew members on board died.

In 2011 the Space Shuttle program was retired. The space shuttles are now on display as museum pieces. 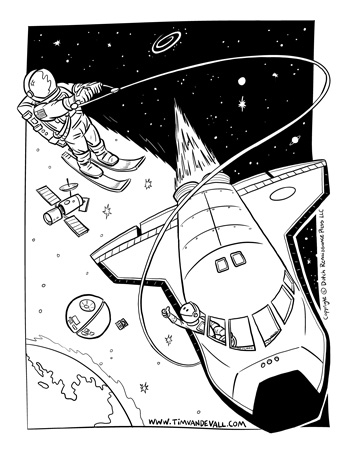 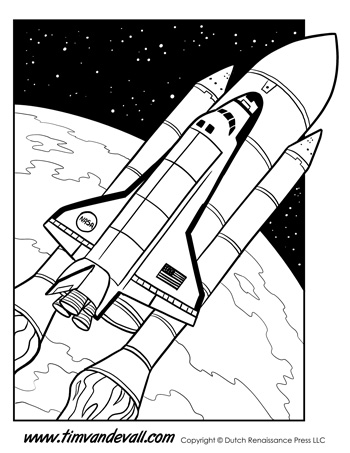