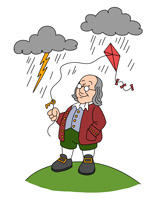 Benjamin Franklin is a personal hero and role model. The next time you’re looking for something to read, pick up or download a copy of his autobiography. Inside you’ll discover the life of a man who lives by a strong moral code, whose brilliant intellect and drive lead him to excel, and whose words and work are so significant that even today, more than 200 years after his death, his legacy resonates throughout countless aspects of American culture. Ben Franklin is, in my opinion, the personification of the United States.

If you like Ben Franklin as much as I do, introduce this great American hero to your kids with this Ben Franklin Coloring Page that I’ve illustrated. The image shows Ben performing his famous kite and key experiment, through which he concluded that lightening was indeed electricity. (On a side note, Ben Franklin did NOT discover electricity. The phenomenon of electricity was already well known by the mid 1700s.) 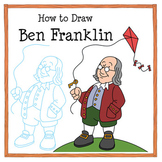 If you or your kids would like to learn how to draw this illustration in a step-by-step tutorial, you can purchase the How to Draw Benjamin Frankin PDF tutorial on Teachers Pay Teachers.