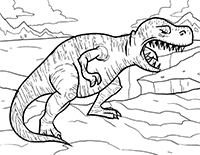 Long ago, before any caveman, neanderthal or ape walked the land, this earth belonged to the terrible thunder lizards: Dinosaurs! Today they may only be ancient fossils in dusty museums, but millions of years ago, when the world was young, these magnificent beasts ruled the land and sea. Some dinosaurs were docile herbivores and made their meals of the ferns and foliage. Others had a more sinister means of obtaining their food. These powerful carnivores roamed their territories in search of their favorite prey: other dinosaurs! And the fiercest of all these flesh eating beasts? You guessed it, the infamous Tyrannosaurus Rex!

The last T Rex may have died out long ago, but he can still live on in our imagination, and in our drawings. That’s why these Tyrannosaurus Rex coloring pages were created, my young friends. Pick up your crayons and markers, and travel back to the Jurassic. Bring color to an extinct species, and imagine what it must have been like to see a real life dinosaur!

Here’s some neat facts about the Tyrannosaurus Rex:

2. The T Rex had about 200 bones, approximately the same amount the human skeleton has.

3. The most complete T Rex skeleton ever found is nicknamed “Sue.” Sue was found in 1990 in South Dakota, and is named after Sue Hendrickson, who discovered her.

4. T Rex’s massive head was balanced by its long and heavy tail.

5. Currently scientists are not sure whether or not the T Rex had feathers.

Dinosaur Illustrations were created by Tim van de Vall. May be used for personal use only. Copyright (c) 2013 Dutch Renaissance Press.