In Part I, Section I of How to Create Characters, I talked about the various traits that make up a character. The most important of these is character motivation.

Motivation can be further explored with a motivation triangle of these three questions:

Examples of the Character Motivation Triangle 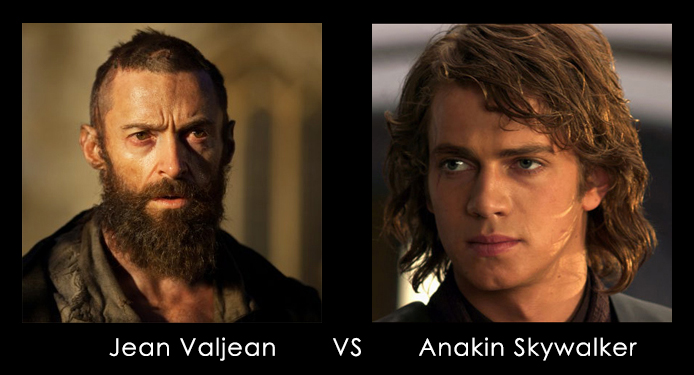 I’ve also added some comments on our natural response as an audience, so show the effects of a proper motivation triangle.

An Example of a Strong Character Motivation Triangle

(I’m going with Jean Valjean because I just read Les Miserables and saw the movie. Both are beautiful works of art, and I highly recommend reading the book before seeing the movie.)  At the start of Les Miserables, we meet Jean Valjean, who has just been granted parole after 19 long years as a prisoner for stealing a loaf of bread to feed his sister’s family.

What is the stimulus? Hunger & lack of money.
What is the response? Steal a loaf of bread.
What is the motivation? Love, survival of family.

Immediately we empathize with this character. Why? Because of unfairness. Unfairness is something we’ve all experienced in life, and it’s one of the most unpleasant feelings there is. It’s horribly unfair to rot in prison for 19 years because you were trying to keep the people you love alive. Man’s innate understanding of fairness is a vey strong emotion, and when tapped into creates an immediate bond with a character and breathes life into him or her.


Jean Valjean is free, but he soon discovers that being free isn’t freedom at all. Being an ex-con has put an indelible mark on his passport, and he is cruelly treated wherever he goes. Reemphasis of unfairness. Further connection with the character from the audience. (Notice the repetition of emotional connection here. Two separate accounts of unfairness locks this within the mind of the audience.)

The stain of Jean Valjean’s past is so horrible that he isn’t even able to find an inn to sleep in. Naturally, Jean Valjean is growing weary and bitter. He was imprisoned for an act motivated by love, and now punished again after already having served his sentence.

Finally, Jean Valjean is granted food and a place to stay at a church run by a kind-hearted priest. So what does Jean Valjean do, this well-meaning man who has been corrupted by unfairness? He steals all the silver of the priest and runs away as fast as he can.

What was the stimulus for Jean Valjean to steal the silver? Unfairness. He has grown desperate from the unfairness he has experience for more than 19 years, and now, when he is shown compassion for the first time, he panics and thinks only of the best way to survive. He can survive by selling the silver. And so he steals the silver and flees, ironically committing the crime for which he has already served the sentence.

What is the stimulus? Chronic unfairness. (19 years imprisonment)
What is the response? Desperate Action.  (Stealing of the silver)
What is the motivation? Survival. (Sell the silver. Make money. Live.)

The character of Jean Valjean experiences this cycle again and again. Victor Hugo instills him with a truly human stimulus, response, motivation. Now, let’s look at the opposite spectrum, at one of the most poorly written famous characters in recent years.

An Example of a Weak Character Motivation Triangle

Anakin Skywalker, the man that ruined the greatest villain we love to hate, Darth Vader. Poor Anakin, and poor George Lucas. As much as I love the traditional Star Wars do I loathe the new trilogy. And it’s not just poor dialogue. Poor dialogue is forgivable. Poor motivation is not.

I’m not going to touch Episode I and II. We’ll go straight into the real messy Episode III, where the character motivation is so outrageous, it makes me want to shake George Lucas and yell, “What the #*%@$ were you thinking?!”


Here’s the story of Anakin Skywalker: We have a powerful Jedi hero who should be selfless and noble, but who’s had some minor anger problems in the past. (He killed all those aliens in Episode II who were torturing his mom.) Now, Anie loves Padme, but he shouldn’t love her, because Jedi aren’t supposed to love. Ok, that’s part of their culture, I can buy that, and forbidden love can still be interesting, if perhaps a bit cliche.

Now Padme and Anakin are secretly married, they have a few fun nights together, and voila! Padme is pregnant. Oops. And here’s where the ridiculous motivation starts. Prepare yourself.

Anakin has a bad dream wherein Padme dies, and he doesn’t want to lose Padme like he lost his mother. So he swears that he won’t let her die.

First and foremost, is a dream a proper stimulus for any action? Isn’t the usual response to a bad dream just, “I had  a bad dream, but it’s just a dream, so no big deal.”  But Anakin is a Jedi, maybe he is seeing into the future. We’ll take a deep breath and go with it.

The response: Anakin vows to save Padme’s life. To have a character vow to prevent something beyond his control is asking a lot from your audience. Psychologically, humans wish to be in control, but as an audience, it can be hard to decipher between irrational reasoning and stupidity. In this case, the audience doesn’t think, “Poor irrational and desperate Anakin.” They think, “What a bloody idiot. You’re going to prevent her from dying in child birth? You’re living in the freaking Star Wars Universe, where they have hyperspace travel. I’d imagine that given such astounding technology, childbirth related deaths are probably really low.”

But let’s assume the audience is still with us. Star Wars is great, right, so we’re going to give it the benefit of a doubt. Now, enter Sentator Palpatine, the evil Sith Lord.

Sentator: I know you’ve been having bad dreams, Anie.
Anakin: (Sniff!) I sure am, and they frighten me so!
Senator: The Dark Side of the Force will give you the power to stop people from dying.
Anakin: Really? Cool! Let me just abandon my entire identity and all my friends, and sign me up!

So Anakin, after half-heartedly trying to stop Palpatine, decides to join the Dark Side to Save Padme.

Here things get real fishy. (But don’t worry, it gets worse) Anakin Skywalker had a bad dream, and so because he loves Padme, he’s doing to join the dark side of the force? Just how DUMB is this guy?

As I said, it get worse.

Senator: So you’re part of the Dark Side now. Glad you could join us.
Anie: Yep! Glad to be here, pal!
Senator: This Jedi Temple could do with some spring cleaning. Do you mind?
Anie: Not at all. I’m off to kill some kids.

Yes, Anakin Skywalker walks into the Jedi temple and massacres like fifty jedi children. What? Huh?

??? That is most convoluted, idiotic, absolute worst motivation triangle I have ever seen in my life! Either Anakin Skywalker is the stupidest most naive individual in the entire star wars galaxy, with the IQ of a Wookie turd, or he’s been horribly pathetically written.

No matter what part of the story you’re writing, the stimulus, response and motivation should all make sense. In Episode III, they sort of made sense at first. Then it got, worse, and worse, until we’re left with an absolutely unintelligible garbage to hit the silver screen.

When the gravity of the response far outweighs the stimulus, something is wrong. Bad dreams should not lead to the killing of younglings.

Now, we could say that it’s all because how the Emperor twisted and used Anakin. Indeed. But that’s a really hard sell. Even Antiheros don’t kill children because they had a bad dream inspired by love. That’s just…stupid.

A word of redemption for Star Wars.

Clearly, the overall message of the new trilogy is that fear corrupts and destroys rational thought, leading to extreme and desperate action. This is a valid and strong central message, but in order to properly get it across, the level of fear must be significant. If Anakin’s motivation had been more than just a dream, perhaps it could have worked. But for now, I suppose we’ll have to wait for the reboot of Star Wars to see a proper application of the theme.

And this is where we’ll stop for today. Next time we’ll cover the importance of your character’s back story, so stay tuned!