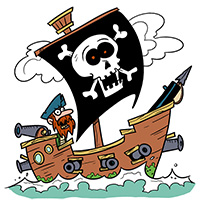 Are you searching the web for free printable pirate treasure maps and pirate party favors,  in order to throw the best pirate theme birthday party the world has ever seen, one that will be remembered by kids, friends, and buccaneers for years to come? Well, your search is over, mate, because on this page you’ll find seven extraordinary pirate party ideas, sure to entertain every land lubber that comes wandering across your deck!

Forget that trip to Party City for your pirate party supplies! All these fun DIY (do-it-yourself) pirate activities can be made at home for free! That’s right, messmates, save your booty for a rainy day!

All the illustrations, pirate pictures and art you’ll need for each of these crafts is provided right on this page. All you need is a printer and some paper, a bit of tape and perhaps a few staples. So, what are we waiting for? Print and party! 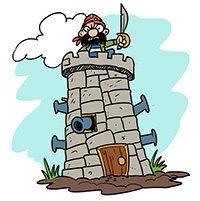 For starters, no pirate birthday bash would be complete without the clever use of a colorful and cartoony pirate treasure map. Well, shiver me timbers, that’s exactly what we’ve got right here, in high resolution too! Illustrated by artist Tim van de Vall, this treasure map is surely the the most brilliant vintage chart on the seven seas. Click on the image below to save it to your computer! 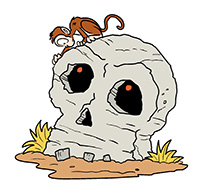 Now that you have a dozen or so pirate tykes running amok in your living room, how to keep them all entertained so they don’t start a mutiny? Let them compete in a contest! Print out several copies of this pirate puzzle game. Have them race to see who can complete the puzzle first. The winner receives a prize, and the rest of the crew has to walk the plank! 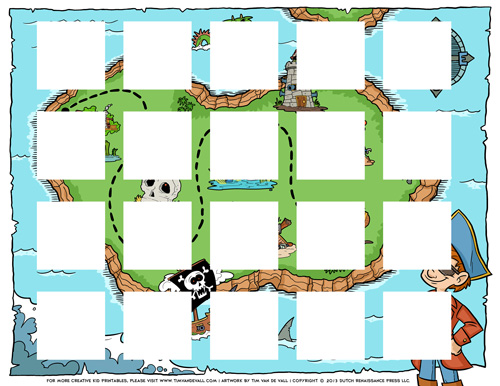 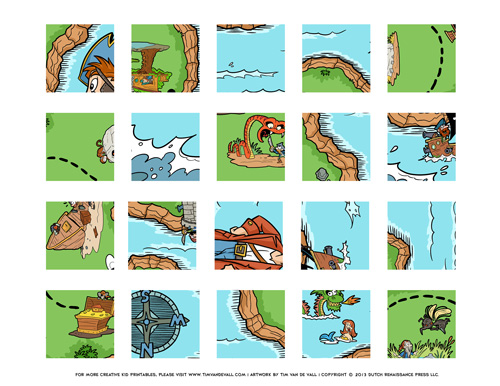 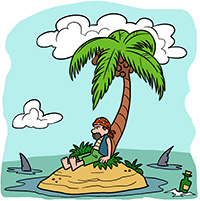 Another fun idea is to use a pirate treasure map for the birthday invitations. Print out the pirate birthday invitation below, add the party information on the back, slap on a postage stamp, and you’re good to go. Since your invitation isn’t store-bought, and yet still looks professional, it will truly be one-of-a kind! 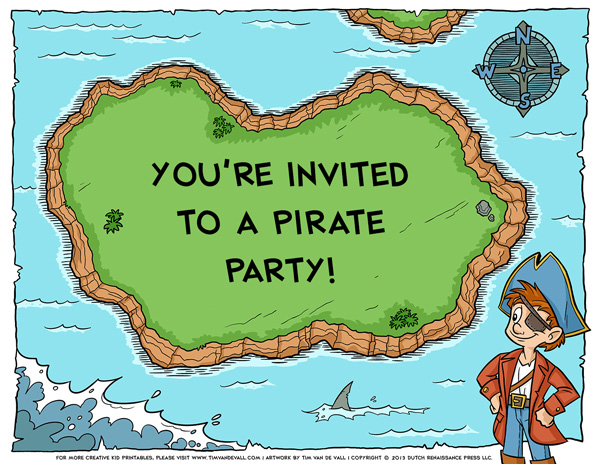 Idea 4. Give Away a Treasure Map Coloring Page 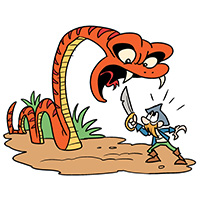 Returning to the land of party favors, maybe you’re interested in an alternative to the place mat idea above. Perhaps you’d like a fun and easy gift for kids that doesn’t require lamination or the use of a bunch of color ink. What about a treasure map coloring page instead? With just a wee bit of Photoshop magic, this very versatile pirate treasure map has transformed into just that. A worthy addition to any pirate goodie bag. 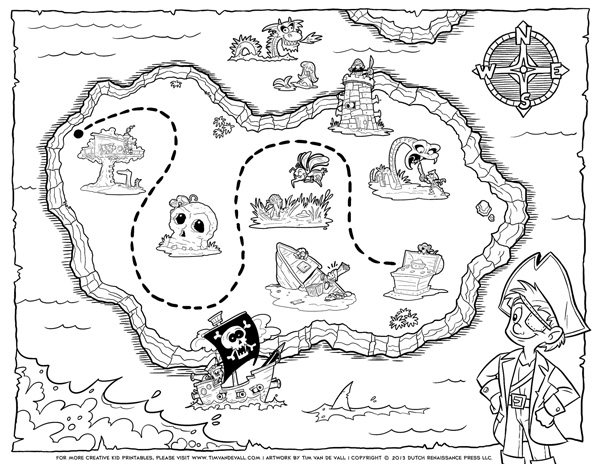 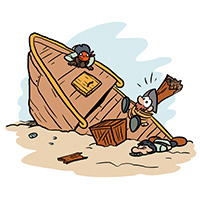 For a birthday kid, the best part of a birthday party is receiving presents. But instead of throwing all the gifts onto a pile, why not have the children hide them? Turn gift giving into a pirate scavenger hunt. First choose a location to hold the scavenger hunt, such as the living room or backyard. Draw an outline of the location inside the island illustration on the map below. Have each child hide his or her present, and mark the locations of the presents on the map. When all the presents are hidden, let the treasure hunt begin! 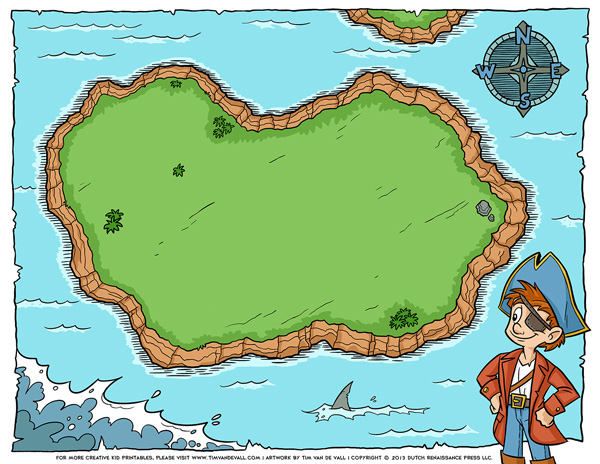 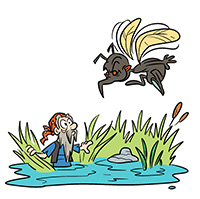 Idea 6. Make Your Own Pirate Board Game

Print one of these blank board game templates. Then gather some game pieces (Lego figures work great), come up with the rules, and play! 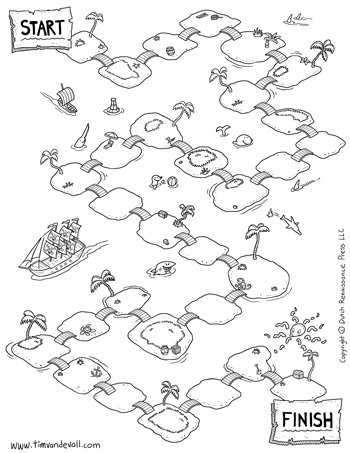 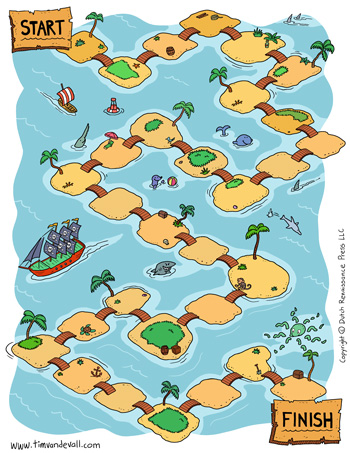 It’s as clear as day: Pirate kids need pirate hats. Fortunately, those have already been designed in a previous post, and are ready to be downloaded. Click the image below to visit Pirate Hat Templates for Kids. 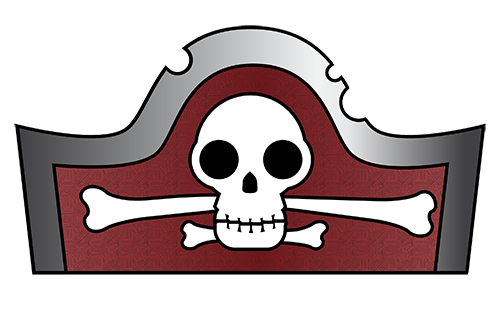 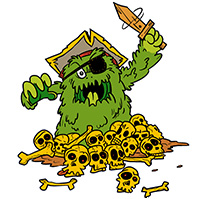 As the party settles down toward the end, and parents start to pick up their kids, it may be good to keep the kids entertained with a pirate themed movie. Here are three great options to choose from.

Muppet Treasure Island: Starring Kermit the Frog, Mrs. Piggy and the rest of the Muppet gang, this funny and child-friendly adaptation of Robert Louis Stevenson’s Treasure Island is sure to delight parents and kids alike.

The Pirates! Band of Misfits:

Brought to you by the makers of Wallace and Gromit, this clay-mation pirate adventure is filled with laughs.