Now that the school year’s begun, it’s important to find new and entertaining ways to educate youngsters. These free printable word searches for kids will surely help with that goal. Expand your children’s vocabulary and problem solving skills in an exciting way. They’ll be too busy having fun to realize they’re learning.

Boys especially will take to these adventure themed word search puzzles featuring pirates, mummies, and underwater exploration. The word search word box is filled with words relevant to each theme. If a child isn’t familiar with some of these words, don’t worry. The definitions for each of the words are provided at the bottom of this page.

Finally, the high quality illustrations will spark a child’s imagination, and conjure up fantastical visions of pirate sea battles, pyramid labyrinths and deep sea treasure hunts. There are three word search worksheets to choose from: Hidden Pirates, Mummy Mystery, and Sunken Treasure. Hidden within each word search is a clever riddle whose answer will reveal itself upon completion of the word search.

Click on the word search images below to open up a high resolution version of the printables. Then right click and press “Save Image As” to save it to your computer.

If you’re planning to print a bunch of these, it’s understandable that you may want to have black and white versions of the word searches. Additionally, children will be able to color them. Please click on the images to open the high resolution files. 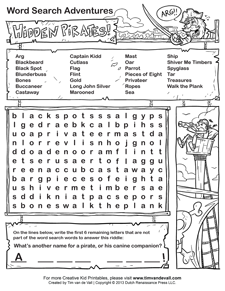 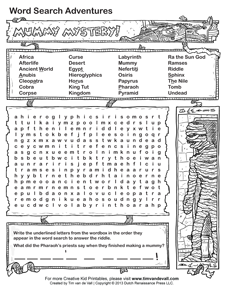 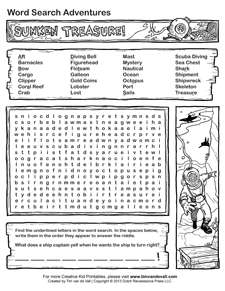 Below you will find the answers for the word searches. This could be useful if you are a teacher using these for a lesson plan. 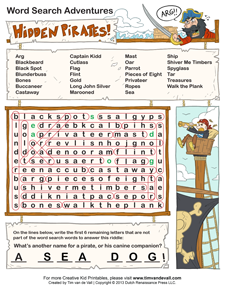 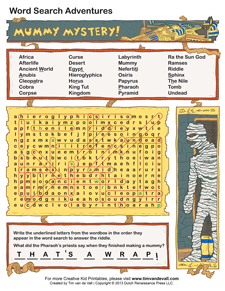 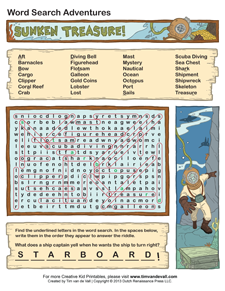 In case there are some word search words that you are unfamiliar with, here are the definitions to each of the words that appear in the word boxes.

Arg – A slang expression of anger and frustration used by pirates. “Arg! I’ve lost me peg leg again.”
Blackbeard – An 18th century English Pirate whose real name was Edward Teach.
Black Spot – From the book Treasure Island by Robert Louis Stevenson, a mark given to a pirate to signify he has been found guilty of a crime.
Blunderbuss – A short musket with a large muzzle.
Bones – Hard organic tissue that makes up the skeleton of vertebrate.
Buccaneer – A pirate that exclusively attacked the Spanish colonies and ships.
Castaway – A person who has landed on an island, usually after a shipwreck.
Captain Kidd – A Scottish Captain turned pirate, who was hanged for piracy.
Cutlass – A broad sabre with a curved blade.
Flag – A rectangular piece of cloth symbolizing a nation or an organization. Pirate flags were often adorned with a skull and crossbones.
Flint – A piece of stone used to create spark to start a fire. In Treasure Island, there is a character named Captain Flint.
Gold – A rare and valuable metal often used for currency.
Long John Silver – A fictional pirate in the book Treasure Island.
Marooned – To be abandoned on an island as punishment.
Mast – A tall beam on a ship that holds the sails.
Oar – A tool used for rowing.
Parrot – A bird known for mimicking human speech. Parrots are often used in pirate themed fiction.
Pieces of Eight – Spanish coins used as international currency during colonial times.
Privateer – A person who is granted permission by a government to attack foreign ships.
Ropes – A collection of braided fibers used to tie objects together on ships.
Sea – A large salty body of water.
Ship – A floating vessel, often used to carry cargo.
Shiver Me Timbers – An expression used by pirates in Treasure Island.
Spyglass – Another name for a hand-held telescope.
Tar – A black organic substance used to seal ship hulls.
Treasures – Valuables, often made of gold.
Walk the Plank – To be thrown overboard by walking off a plank into the sea.

Africa – The second largest continent. Africa contains Egypt.
Afterlife – Life after death.
Ancient World – The world from a long distant past.
Anubis – The ancient Egyptian god with a Jackal’s head who lent the dead to the underworld.
Cleopatra – An Egyptian Queen who lived from 69-30 BC.
Cobra – A venous snake famous for its flatten neck skin.
Corpse – A dead body.
Curse – A magical spell that torments its victim.
Desert – A dry landmass composed mostly of sand.
Egypt – A nation in North East Africa, famous for its rich ancient history.
Hieroglyphics – Symbolic written language used by ancient Egyptians.
Horus – The Falcon-headed Egyptian sun god.
King Tut – A well known young Egyptian Pharaoh who ruled around 1300 BC.
Kingdom – A nation ruled by a king or monarch.
Labyrinth – A winding non-branching path leading to a center. Labyrinths are distinct from mazes because they do not contain multiple paths.
Mummy – A well-preserved corpse.
Nefertiti – An ancient Egyptian Queen who lived around 1300 BC.
Osiris – The ancient Egyptian god of the afterlife.
Papyrus – A paper material made from the Papyrus plant.
Pharaoh – The term used for an ancient Egyptian ruler.
Pyramid – A large tomb made of a square based and triangular sides.
Ra the Sun God – An ancient Egyptian Sun god.
Ramses – The name used for 11 Egyptian Pharoahs, the most well-known being Ramses II.
Riddle – A puzzling question.
Sphinx – An Egyptian statue depicting the head of man, the body of a lion, and the wings of a bird.
The Nile – A river that runs through Egypt/Africa. The longest river in the world.
Tomb – A resting place for the dead.
Undead – A fictional state between living and dead.

Aft – Toward the stern or back of a ship.
Barnacles – crustaceans that attach to rocks and the bottom of ships.
Bow – The front of a ship.
Cargo – Merchandise carried on a ship.
Clipper – A fast sailing ship.
Coral Reef – A reef composed of coral that is often home to diverse marine life.
Crab – A common crustacean known for its sharp claws.
Diving Bell – An old fashioned tool used to submerge people safely underwater.
Figurehead – A carvding on the bow of a ship, often depicting woman.
Flotsam – Shipwreck debris floating on the water.
Galleon – A large sailing vessel.
Gold Coins – A currency often used in fictional pirate adventures.
Lobster – A long crustacean related to a crab.
Lost – To not know one’s location or the location of familiar territory.
Mast – A tall beam on a ship that holds the sails.
Mystery – An unresolved enigma.
Nautical – Related to the ocean or sea.
Ocean – The large body of salt water that covers 3/4 of the earth.
Octopus – An eight-legged cephalopod.
Port – The left side of a ship.
Sails – Large sheets of cloth that catch the wind and propel a ship forward.
Scuba Diving – A relatively modern method for underwater exploration using a breathing device.
Sea Chest – A container holding a sailor’s belongings.
Shark – A well-known carnivorous fish with a streamlined body and fins.
Shipment – A collection of cargo.
Shipwreck – The remains of a ship that is destroyed at sea.
Skeleton – The hard structural tissues of a vertebrate animal.
Treasure – A highly valuable object.

Thanks for taking the time to print out these word searches. Please know that they may be used for educational and personal, non commercial use only. Commercial use of any of these illustrations is prohibited. All illustrations are created by Tim van de Vall and copyright © 2013-2021 Tim’s Printables / Dutch Renaissance Press LLC.