Simple machines are the building blocks for creating more complex machines. For instance, a bicycle is created using wheels, levers, and pulleys.

Below you will find three simple machines worksheets. In the first worksheet, kids have to label the simple machine. In the second and third worksheet, students have to identify which simple machine best represents the objects shown. Please click on a worksheet image to go to its download page in the printables library. 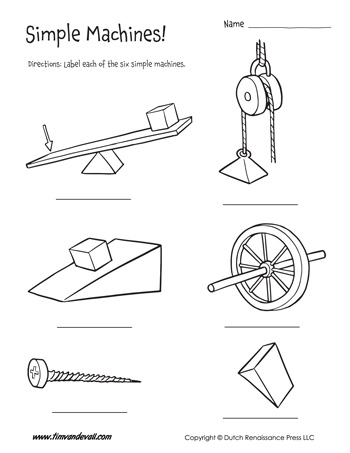 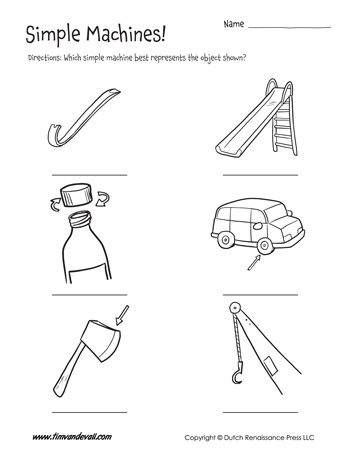 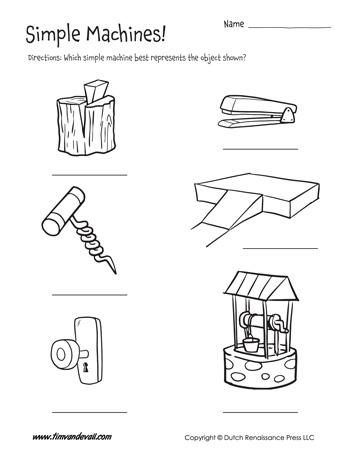 A lever is a rigid bar that rests on a pivot called a fulcrum. It is easier to lift a heavy boulder with a lever than it is to pick it up with just your muscles. Examples include a crowbar, scissors,  a wheel barrow, a rake, a seesaw, and stapler.

An inclined plane, also known as a ramp, is a slope that helps in raising or lowering heavy objects. It is easier to push a heavy box up an inclined plane than to lift it up. Examples of inclined planes include a wheelchair ramp, a waterslide, stairs, and ladders.

A wedge is a piece of wood or metal with a thin end that is driven between two objects to separate or hold them in place. When you are chopping wood, you are using a wedge to split apart the parts of the log. Examples of wedges include a doorstop, an axe, a nail, and a pushpin.

A pulley is a wheel on an axle with a rope through it, to make it easier to lift or lower objects. Examples of pulleys include a crane and a flagpole.

A screw is a threaded cylindrical bar, which is forced into another object through rotation. Screws are usually made of metal, and are used to hold together countless everyday objects. An interesting examples is the Archimedes’ screw, which is used to move water uphill.

During the Renaissance, the simple machines were recognized as the simplest mechanisms to multiply force. However, the six simple machines are not sufficient to describe the complexity of modern day machinery.