Learn about the 8 planets that make up our solar system with this convenient printable solar system diagram for kids. (If you thought there were 9, remember, Pluto has been demoted to a dwarf planet.) Starting with the planet closest to the sun, there’s Mercury, Venus, Earth, Mars, Jupiter, Saturn, Uranus and finally Neptune.

The solar system diagram is available in both color and black and white. It was created for classroom and educational use for students, parents and teachers. You may print it for any personal and educational project. The planets are roughly to scale relative to one another. You may not post this content on your own website.

I’ve also included a printable collection of the planets and the sun, wherein each planet is the same size. This may be useful for decorating posters and projects.

Click on the Solar System Diagram below to open the larger version in your browser. Then right-click and press “Save image as…” to save it to your computer. 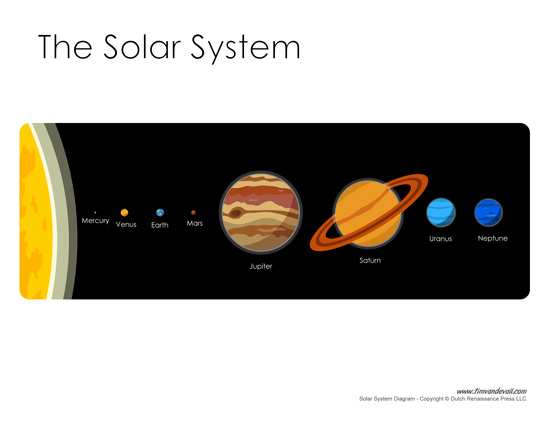 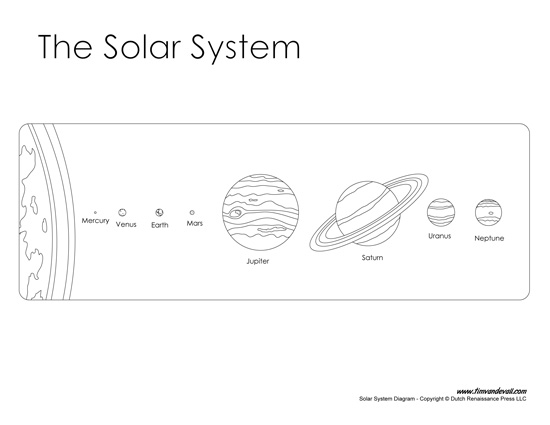 The Planets in Our Solar System 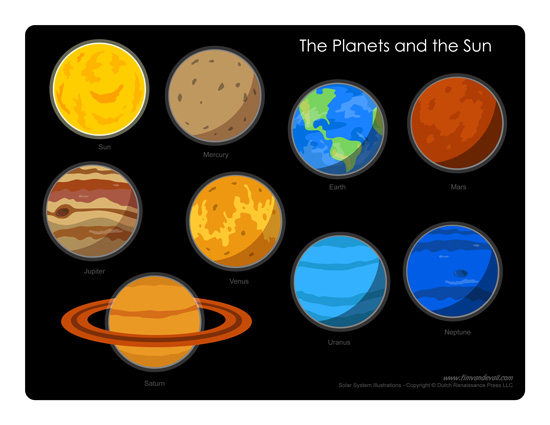 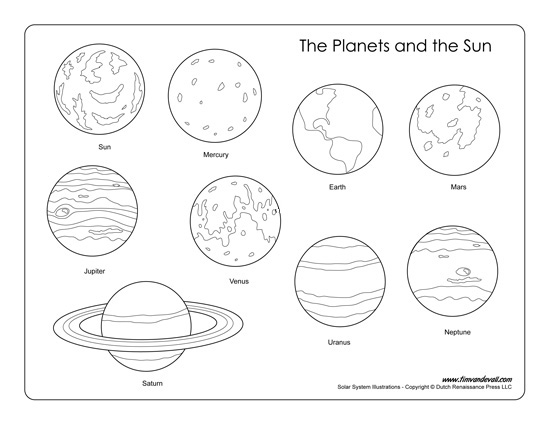 Mercury is the smallest planet, named after Roman messenger god. During the day, the temperature on Mercury can reach up to 800 degrees Fahrenheit!

Venus is the planet second closest to the sun. It is named after the Roman goddess of love and beauty. It is the planet closest in size to Earth. It is the hottest planet in the solar system, with an average surface temperature of 863 degrees Fahrenheit.

Earth is the third planet from the sun, and our home. It is the only planet that is known to contain life.

Mars is the fourth planet from the sun. It is red in color and named after the Roman god of war.

Jupiter is the largest planet in our solar system, and the fifth from the sun. Jupiter is named after the Roman king of the gods. The red dot on Jupiter is a giant storm.

Saturn is the 6th planet from the sun. There are 9 contiguous rings around Saturn, and 3 arcs. They are made of ice particles, rock and dust. Saturn is named after the Roman god of agriculture.

Uranus is the 7th planet from the sun. Uranus is names after the Greek god of the sky. It is the only planet to be named after a Greek god instead of a Roman god.

Neptune is the 8th and farthest planet in our solar system. It is named after the Roman god of the sea.

About the Solar System

The Solar System formed about 4.6 billion years ago. It is made up of the sun and the objects that orbit around it. Our solar system sits in the Milky Way galaxy, about 27,000 light-years from the Milky Way center.