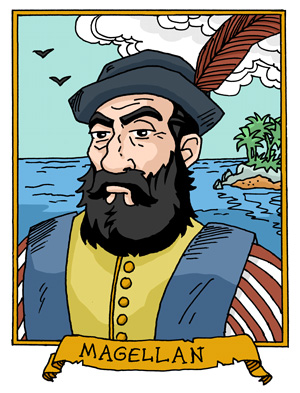 Overview: This article summarizes the life and accomplishments of explorer Ferdinand Magellan. The intended audience for this article is elementary and middle school Social Studies students.

Ferdinand Magellan (1480-1521) was a 16th century Portuguese explorer, famous for leading an expedition around the world.

Magellan was born in Portugal around 1480. His parents died when he was ten. Thanks to his wealthy heritage, Magellan became a page at the Royal Court. (A page is a young male servant who usually acts as a messenger.)

When Magellan was 25 he joined a fleet of Portuguese ships and set off for India. He remained there for 8 years.

Voyage Around the World

In September 1519, Ferdinand Magellan set out from Spain by order of King Charles V of Spain, with five ships and 250 sailors, intent on reaching Asia by traveling west across the Atlantic and then going around the Americas. He traveled southwest and passed along the east coast of South America, and cut through the Strait of Magellan into a new ocean. This ocean was much calmer than the Atlantic, and so Magellan named it the “Pacific,” which means “peaceful.”

For three months Magellan sailed west across the Pacific. But the food reserves aboard his ships spoiled, and the sailors had to resort to eating rats, sawdust, and leather. Many of the sailors died of scurvy and starvation.

Magellan finally reached the Philippine Islands in 1521. On April 27, Magellan and his crew fought the Philippine natives in the Battle of Mactan, and Magellan was killed.

Of Magellan’s five ships, only the Victoria returned to Spain, completing the journey around the world, with 18 men on board. An estimated 232 men had died throughout the expedition.

If your kids/students enjoy coloring, here is a free printable Ferdinand Magellan coloring page they may enjoy. Click the coloring image to go to the download page.

The Death of Magellan

“So many of them charged down upon us that they shot the captain through the right leg with a poisoned arrow; on that account, he ordered us to retreat slowly, but the men took to flight, except six or eight of us who remained with the captain. The natives shot only at our legs because they were naked. So many were the spears and stones that they hurled at us, that we could offer no resistance. The mortars in the boats could not aid us since they were too far away, so we continued to retreat for more than a good crossbow flight from the shore, still fighting in water up to our knees. The natives continued to pursue us, and picking up the same spear four or six times, hurled it at us again and again. Recognizing the captain, so many turned upon him that they knocked his helmet off his head twice, but he always stood firm like a good knight, along with some others. We fought thus for more than one hour, refusing to retreat farther; an Indian hurled a bamboo spear into the captain’s face. The latter immediately killed him with his lance, which he left in the Indian’s body. Then, trying to lay hand on sword, he could draw it out only halfway, because he had been wounded in the arm with a bamboo spear. When the natives saw that, they all hurled themselves upon him. One of them wounded him on the left leg with a large terciado, which resembles a scimitar, only being larger; that caused the captain to fall face downward. Immediately they rushed upon him with iron and bamboo spears and with their cutlasses, until they killed our mirror, our light, our comfort, and our true guide. When they wounded him, he turned back many times to see whether we were all in the boats. Thereupon, beholding him dead, we, wounded, retreated as best we could to the boats, which were already pulling off.”