The poster is available in both color and black and white. The dimensions of the free version are 927 x 1200 pixels. When printed on 8.5 x 11 paper, this resolution will produce a nice crisp image.

However, if you would like to get top notch quality for your printable, or if you want to print out this poster on a larger sheet of paper, you can download the full-resolution 2550 x 33000 pixel version for $1.00 USD. 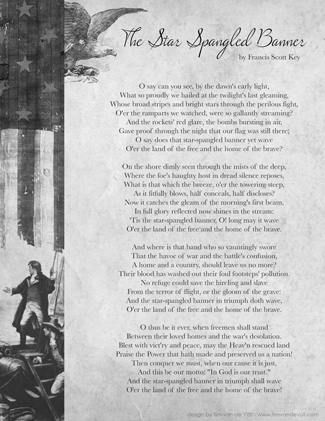 A Brief History of the Star Spangled Banner

The Story of an Amateur Poet and the War of 1812

During the War of 1812, the British Royal Navy attacked the Baltimore Harbor. A young American lawyer named Francis Scott Key witnessed this attack. On September 14, 1814, the morning after the bombardment, Key saw that the American flag still flew over Fort McHenry. This iconic visual inspired him to write the lyrics for the Star Spangled Banner. Little did he know that 100 years later, these words would become the lyrics of the national anthem of the United States.

Francis Scott key wrote the poem in his hotel in Baltimore, to the tune of a popular song at the time called, “To Anacreon in Heaven,” which was written by John Stafford Smith. The poem was printed under the title, “Defence of Fort M’Henry” and was first published in the Baltimore Patriot. The poem has four stanzas, though only the first is usually sung. An additional 5th stanza was written during the Civil War.

The original flag seen by Francis Scott Key still exists today, and can be found in the Smithsonian Museum.