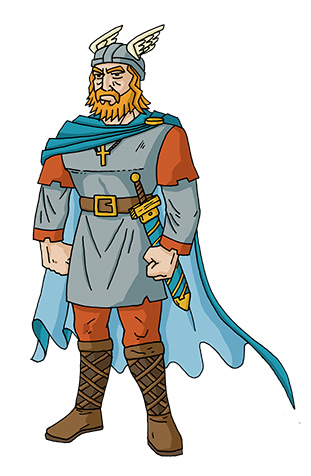 Leif Ericson (also spelled Erikson) (970 – 1020 A.D.) was a Viking explorer credited for being the first European to set foot in North America.

The Voyages to Vinland

Below you will find an abridged version of the “The Voyages to Vinland,” from the Harvard Classics Volume, “American Historical Documents.”

Source: A.M. Reeves 1890 translation of the 13th century manuscript, “The Saga of Eric the Red.”

“Leif was the son of Eric the Red, who dwelt at Brattahlid in Greenland, where he was held in the highest esteem. Leif was a large and powerful man, and of a most imposing bearing – a man of sagacity, and a very just man in all things.

In Iceland there lived a man named Biarni Heriulfsson who wished to visit his father, Heriulf, in Brattahlid. Biarni had been in the Greenland Sea, and he and his crew soon knew not whither they were drifting. As they traveled, they saw three mysterious lands.

After many days of travel, Biarni found Greenland, and in Brattahlid, he gave an account of his travels. Leif, the son of Eric the Red, wished to explore the lands that Biarni had seen. He visited Biarni, and bought a ship of him, and collected a crew, until they formed altogether a company of thirty-five men.

They sailed out to sea, and found first that land which Biarni and his shipmates found last. ‘To this country I will now give a name, and call it Helluland.’ (Baffin Island)

They returned to the ship, put out to sea, and found a second land. Then said Leif, ‘We will call it Markland.’ (Labrador)

They sailed away, and were out two days before they sighted land. They ran their ship aground there. They afterward determined to establish themselves there for the winter, and they accordingly built a large house. There was no lack of salmon there either in the river or in the lake, and larger salmon than they had ever seen before.

One of the company was a German, named Tyrker. Tyrker had lived with Leif and his father for a longtime, and had been very devoted to Leif when he was a child. Tyrker spoke, ‘I had something of novelty to relate. I have found vines and grapes.’ Leif said to his shipmates, ‘We will now divide our labors, and each day will either gather grapes or cut vines and fell trees, so as to obtain a cargo of these for my ship.”

A cargo sufficient for the ship was cut, and when the spring came, they made their ship ready and sailed away; and from its products Leif gave the land a name, and called it Wineland. (Newfoundland)”

c 970-980 AD: Leif Ericson is born in Iceland. He is the son of Eric the Red and his wife Thjodhildr.

986 AD: Eric the Red is banished from Iceland. He travels west and establishes a permanent settlement in Greenland.

999 AD: Leif Ericson travels from Greenland to Norway. He is blown off course to the Hebrides (Archipelago off west coast of mainland Scotland), where he says most of the summer. In Hebrides he meets a noblewoman named Thorgunna, who later gives birth to their son Thorgils. He stays with King Olaf Tryggvason and converts to Christianity.

c 1000 AD: They winter in Vinland, and return to Greenland in spring with a cargo or grapes and timber.

c 1000-AD: On the way east, they rescue an Icelandic crew. Returns to family estate and starts to preach Christianity. 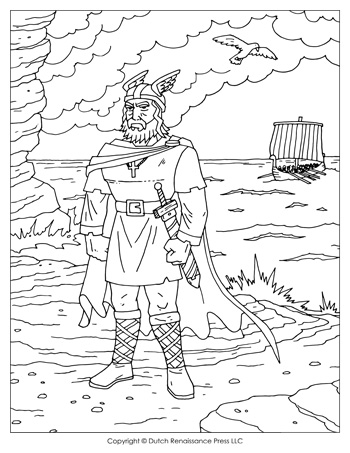 The following Leif Ericson images are in the public domain.

Here are some links to public domain ebooks about Leif Ericson, the Vinland Voyages, and the Vikings.

The Finding of Wineland the Good by A.M. Reeves (1895) – Source: Internet Archive